The National Institute of Health reports that 80% of all known human infections are associated with biofilms. Biofilms are a serious and urgent clinical and financial burden to health care systems and patients, costing industry, cities, and hospitals over $500 billion each year.

What are biofilms and why do they play such an important impact in our health and safety? 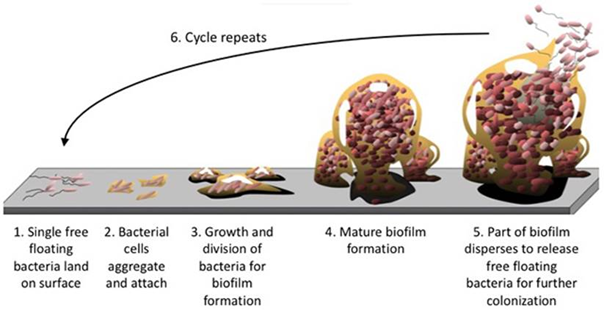 Biofilms are a glue-like substance excreted by bacteria and/or fungi to attach to surfaces. Biofilms protect and allow bacteria to survive and thrive in hostile environments. Biofilms make bacteria up to 1,000 times more resistant to antibiotics and antimicrobials.

Forming from free floating bacteria, a biofilm colony is created through surface adhesion and self production of slime.

New bacteria join the colony by directly adhering to the surface or to the existing colonists the initial adhesion to the surface is weak but permanent anchors form if they are not immediately separated.

As the biofilm grows, bacteria are released, and the cycle continues.

Biofilms can form on both living and non-living surfaces. Research indicates that the persistence of microbial biofilms may be linked to aggravating symptoms linked to common skin conditions such as dandruff, seborrheic dermatitis, and acne.

Biofilms form on teeth, especially in pets. Plaque and tartar are biofilms that cause inflammation, irritation, tooth decay, and loss of teeth, and can lead to serious complications in a pet’s kidney, heart and brain affecting 68% of cats and 76% of dogs.

Biofilm impaired healing is the largest unresolved problem in wound and surgical care as biofilms are one of the main contributors to antibiotic resistance. On medical devices, biofilms can lead to serious life-threatening infections.

Biofilms are a persistent threat to our life, contaminating food manufacturing, dairy farming, industrial water systems, and even causing metal surfaces to corrode.

With 74 patents and patents pending, Kane Biotech is THE Biofilm Company. Creating smarter ways to fight bacteria, Kane is leading the advancement of technologies and products that prevent and disperse biofilms.