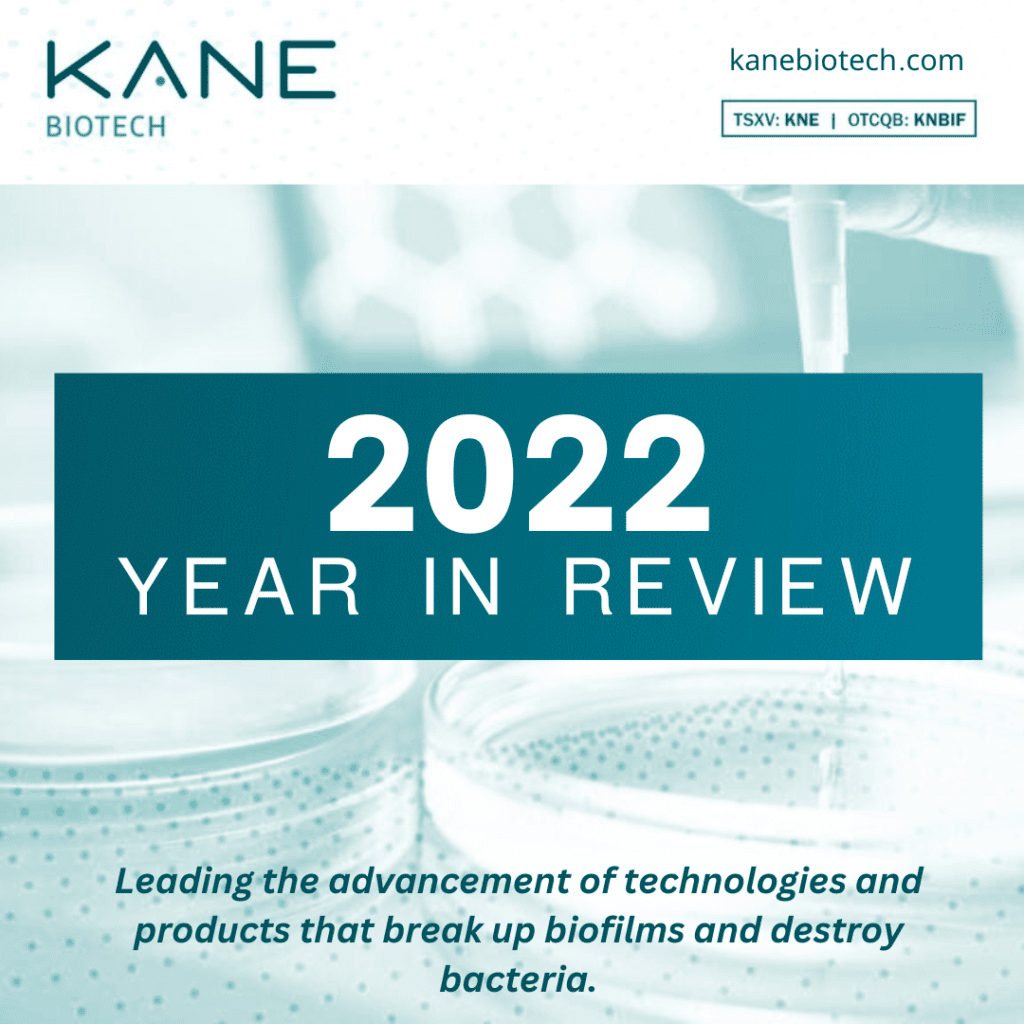 As 2022 draws to a close, Kane Biotech reflects upon its achievements in the last year. Kane refers to itself as THE Biofilm Company, with over 80 patents and patents pending. Kane focused its efforts in 2022 on further developing its wound care product pipeline and growing its animal health and dermatology businesses.

In the first quarter of 2022, Kane announced positive results from biocompatibility and in vivo safety studies in preparation for human clinical trials set to begin in early 2023. DispersinB® wound gel underwent an extensive pre-clinical testing regimen showing it to be safe, non-toxic, and non-irritating, as well as passing all biocompatibility testing. In addition, DispersinB® wound gel significantly accelerated the healing of both infected and non-infected dermal wounds compared to controls. Developed by Kane Biotech, DispersinB® wound gel is designed to accelerate healing of Stage I-IV pressure ulcers, partial and full thickness wounds, diabetic foot and leg ulcers, post-surgical wounds, first and second-degree burns, and grafted and donor sites.

In the second quarter of 2022, Kane announced the appointment of Dr. Gregory Schultz, a world-renowned expert on biofilms, as Chief Scientific Officer (CSO). As a world-renowned expert in wound care and biofilms, Dr. Schultz’s appointment is a big step in advancing development and commercialization of Kane’s DispersinB® and coactiv+™ technologies, aimed at treating biofilm-mediated antimicrobial tolerance. Dr. Schultz is a Professor Emeritus of Obstetrics and Gynecology in the College of Medicine at the University of Florida where he established the interdisciplinary Institute for Wound Research (IWR), serving as Director for IWR for 32 years. Dr. Schultz is Past President of the Wound Healing Society, and past member of the National Pressure Injury Advisory Panel.

In May, Kane announced that its private placement for aggregate gross proceeds of up to $1,000,000, as previously announced on March 15, 2022 had been fully subscribed and closed.

The company reported in May that it had obtained ISO 13485:2016 certification for its quality management system specific to its ongoing efforts to design and develop novel medical devices for the wound care market. Quality management policies, procedures, and practices have been established to support future global medical device registrations and approvals as Kane continues to drive towards commercialization with our wound care portfolio. Quality and continuous improvement are core values of Kane.

In June, Kane announced it amended its credit agreement with Pivot Financial Inc. maturing August 31, 2022. The amendment extends the maturity to January 31, 2023 and increased the credit facility to $4 million with approximately $1.8 million of new capital having been provided. The increased credit facility will be used by Kane Biotech for funding research and development relating to eligible government reimbursable expenditures and general working capital purposes.

Kane also received an additional $425,000 USD of funding for its DispersinB® Hydrogel related to its Medical Technology Enterprise Consortium Research Project Award which was granted in 2020 and funded by the U.S. Department of Defense. This additional funding supplements the approximately $2.7 million USD in non-dilutive funding previously awarded for the continued clinical development of Kane’s DispersinB® Hydrogel to treat biofilm-mediated antimicrobial resistance in non-healing chronic wounds.

This year, Kane was able to attend in-person events that had been previously halted due to the Covid-19 pandemic, targeting human and animal health, as well as investor events in North America. The company participated in three Capital Event Marketing investor events in both Canada and the US in 2022.

Kane promoted its DermaKB™ Biofilm Products which offer a line of scalp care products with coactiv+™ at the COSMOPROF North America Conference. COSMOPROF showcases the best in beauty, cosmetics, skincare, toiletries, fragrances, organic beauty products and accessories – specialized with retail channel distribution in mind. Recent research has indicated that the persistence of biofilms may be linked with aggravating the symptoms associated with common scalp conditions, such as dandruff and seborrheic dermatitis.

Kane’s CSO, Dr. Gregory Schultz, was a guest speaker at the Leaders in Wound Care event in New Orleans and discussed research tools for wound care. The event was sponsored by SerenaGroup® in partnership with Wound Care Collaborative Society (WCCS). Dr. Schultz was also a guest speaker at the Dry Eye Symposium 2022, providing an overview of biofilms in blepharitis. Kane also presented at the Symposium on Advanced Wound Care (SAWC) Fall forum, designed to connect the entire wound care team and foster inclusivity, innovation, and interdisciplinary collaboration. Kane sponsored and was a presenter at the 2022 IWC (Innovations in Wound Healing) annual conference recently held in Florida. Dr. Schultz presented on Kane’s coactiv+™ Antimicrobial Wound Gel, for which Kane has submitted a 510(k) premarket notification to the FDA.

Kane is in various stages of negotiations with wound partners that will advance the commercialization of Kane’s coactiv+™ Antimicrobial Wound Gel in 2023. This will be Kane’s first wound product introduced to the global market and will create a new revenue stream supplementing existing revenues from Kane’s animal health and dermatology units. Kane anticipates the announcement of wound care partnerships to commence in early 2023.

Kane Biotech will continue to demonstrate impressive commercialization progress in 2023 across its animal health, wound care, and dermatology business pillars, with a focus on expanding Kane’s core technologies.